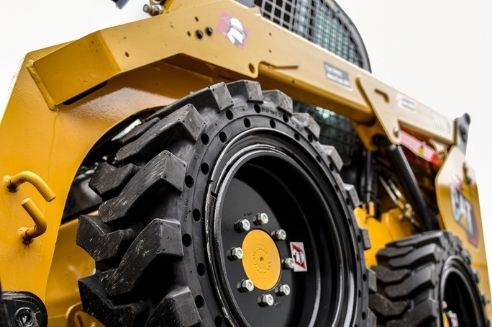 While skid steer loaders are highly durable pieces of machinery, they aren’t immune to the occasional issue. In many cases, such operational issues can lead to downtime, expensive repairs, and lost revenue. Fortunately, there are many ways in which skid steer owners can minimize common skid steer problems that can hurt their bottom line. From practicing proper maintenance to choosing tires wisely, here are some of the best ways to reduce skid steer downtime and costs.

Each time a pneumatic tire pops, the skid steer’s operation must come to a halt. In addition to the time it takes to remove the flat tire and replace it with a new one, you may also have to wait even longer if you don’t have a spare tire on hand. Such downtime can cost businesses a significant sum of money in lost labor and may hurt relationships with clients by pushing back project timelines.

In addition to costs associated with downtime, replacing the damaged or flat pneumatic tire will also cost money. If flat tires occur regularly, such costs can quickly add up. To avoid downtime and replacement costs, consider purchasing solid skid steer tires. Such tires will never go flat—even when driving over nails, sharp rocks, or screws—and typically last at least three times longer than pneumatic tires. Plus, solid cushion tires don’t require any maintenance since there isn’t any air to fill, holes to patch, or pressure to check. As such, they can save you a significant amount of money in the long-run.

Lubricate Your Machine and Attachments

While greasing your machine and skid steer’s attachments may seem like a hassle, doing so is essential for preventing metal parts from rubbing against each other, which can cause significant premature wear. Such wear may mean that you have to spend hundreds or even thousands of dollars to repair or replace the damaged component. Plus, such repairs or replacements could take several days to complete, which will significantly increase your project’s downtime. As such, it is well worth your time to generously lubricate your skid steer’s attachments on a regular basis. For instructions on what type of lubricant to use and how often your specific attachment requires lubrication, consult the manufacturer’s operation manual.

Clean Your Rubber Tracks and Tires

Whether you have rubber tracks or tires on your skid steer machine, it’s important to clean them regularly. Cleaning your rubber tracks and tires is an easy way to significantly increase their lifespan. The process of removing debris, mud, and other foreign substances from tires and tracks should be completed as quickly as possible. If clay or mud hardens inside of the guides or undercarriage of the skid steer, a significant amount of stress will be placed on the skid steer’s tracks or tires the next time someone operates the machine. In addition, any hydraulic oil or diesel fuel that may have leaked onto the track or tires could cause the rubber compound to breakdown or deteriorate.

Obviously, it is impossible to operate your skid steer without tires or tracks, which means that any issues will completely halt operations until they are repaired or replaced. Plus, rubber tracks are one of the most costly components of a skid steer, which means that having to replace them can put a significant dent in one’s budget. As such, cleaning your skid steer’s rubber tracks and tires should be viewed as an essential maintenance task.

Be Mindful of Your Operating Environment

For example, when operating a skid steer on soft surfaces such as mud or sand, the way in which you turn the machine or how fast you drive likely won’t put much extra wear on the tracks and tires. However, when operating your skid steer on hard finished surfaces such as concrete, taking sharp turns, or counter-rotating can significantly decrease the lifespan of tracks and tires. To avoid having to replace such components, instruct operators to make more gradual turns instead when driving on harder surfaces. Doing so could potentially increase the lifespan of your tracks and tires by up to 50 percent.

One of the best ways to prevent costly, time-consuming skid steer issues is by conducting regular inspections. Such inspections will allow you to identify any small issues so that you can rectify them before they inevitably turn into a bigger problem. Ideally, skid steer operators should conduct inspections after every use to make sure that the equipment didn’t incur any damage while on the job. Doing so won’t just save you money by preventing significant operational issues from occurring—regular inspections will also help keep operators safe by identifying safety risks prior to operation.

McLaren Industries is widely recognized as the best solid skid steer tire and rubber track manufacturer in the industry. Backed by over 20 years of industry experience, all of our products are designed to deliver optimal performance, comfort, and longevity to minimize downtime and maintenance costs. To request a quote or get help choosing the best tire for your needs, please send McLaren Industries a quote request or call us at (800) 836-0040.