How Tracks Went From Winning Wars to Conquering Job Sites 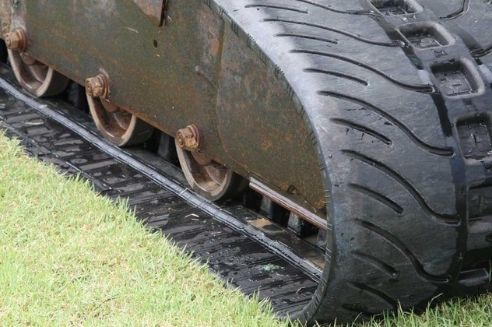 Compact loader rubber tracks have an extensive history that goes back long before these machines even existed. Contrary to popular belief, these products existed long before skid steers. In fact, they were repurposed later into the equipment accessories we know them to be today. That’s why it’s important that you take a look at where they came from if you want to understand all there is about these items. This is how tracks went from winning wars to conquering job sites.

Prior to the World War Era, rubber tracks existed as an idea for several years. However, few companies had access to the resources necessary to make this vision a reality. This would change during the onset of World War I and then World War II. During WWII most transportation was over dirt roads, fields, and damage streets. A sudden rain would stall the movement goods and arms instantly.  There was a need for tracks on transportation vehicles to help in the logistics of winning the war. The initial prototype track would go on to be the basis for the modern rubber track.

During the onset of World War II, previously conceived half-track vehicles began showing their full use. These long, truck-like machines consisted of wheels in the front and two durable track systems along the rear. Made with Firestone’s own rubber tracks, these models had superior weight savings and stability off-road and offered a smoother ride over the damaged city streets of Europe. As such, they were the perfect method for transporting heavy artillery on dirt roads, fields and war beaten inner cities. Through these advancements, the United States gained an advantage in logistics on the battle field that help lead to the Allied victory.

Following these periods of war, the engineering industry continued to evolve, developing machinery to reduce the impact of physical labor and make these tasks more efficient. Because of this, the rubber track saw additional refining and use. The first alteration was in mini excavators, increasing their capacity and making them more maneuverable. Then, when the first CTL hit the market in the 1990s, these tracks were a natural complement to them, providing superior traction and durability that steel couldn’t replicate.

Over time, rubber tracks have continued to evolve, and additional industries have taken an interest. Due to the benefits of increasing machine capacity, efficiency, and overall dependability, even construction equipment now utilizes these tracks over steel models. And this isn’t just the case in the United States, equipment manufacturers in Japan have been using rubber tracks for over 40 years on mini excavators.

Combined, these changes and further advancements in rubber track technology spurred a widespread shift to rubber tracks that we can expect to see for years to come. As such, they’re one of the most important parts of today’s industry structure. So much so, that we may see some manufacturers stop producing wheel skid steers in the future.

Now that you know how tracks went from winning wars to conquering job sites, you can better understand just how vital they are to a series of tasks. That’s why McLaren Industries seeks to provide the variety of rubber tracks patterns for Mini Excavators and Skid Steer to be applied on different job sites you could ever need to make the most of your compact track loader equipment. From advice on how to maintain your tracks to supplying you with quality rubber tracks themselves, our help is just a call away. You can learn more by calling 800-836-0040.